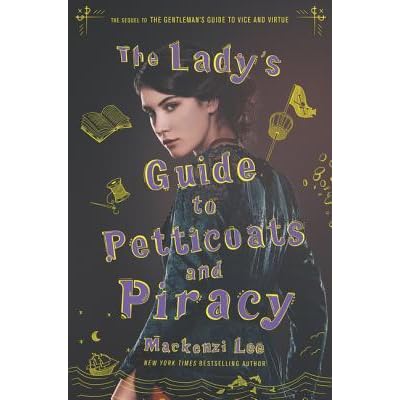 I finished this a while back, but my blogging has been lax lately. The Lady’s Guide to Petticoats and Piracy was on nearly every ‘favourite reading list of 2018’. Why? I am not quite sure. Everyone has different tastes, and while I thought this was a fun book, I wouldn’t say it was in my top ten for 2018. I enjoyed the first third of the book and then I kind of churned my way through it until I finished it. I would probably give it two stars, but it doesn’t matter that much what I think because this book was universally loved and has a four and a half rating on GoodReads – so what do I know? Personally, I found this book and The Gentlemen’s Guide to Vice and Virtue a little too much. Too much was jammed into both books and I couldn’t connect to any of the characters. I know we are meant to think that Percy and Monty are some great love story, but I didn’t connect with either of them. Many have written that Monty is hilarious and witty, but I don’t see it. So rather than go on disagreeing with other reviews, I will quote Spike Lee and say ‘it wasn’t my cup of tea’.

On the morning of April 28, 1986, a fire alarm sounded in the Los Angeles Public Library. As the moments passed, the patrons and staff who had been cleared out of the building realized this was not the usual fire alarm. As one fireman recounted, “Once that first stack got going, it was ‘Goodbye, Charlie.’” The fire was disastrous: it reached 2000 degrees and burned for more than seven hours. By the time it was extinguished, it had consumed four hundred thousand books and damaged seven hundred thousand more. Investigators descended on the scene, but more than thirty years later, the mystery remains: Did someone purposefully set fire to the library—and if so, who?

Now this book is endlessly fascinating. I have LOVED reading this book. At first, I was fascinated because of the fire and who would start a fire in a library, but Susan Orlean talks of libraries in general and her love for libraries. She weaves the history of the Los Angeles Public Library throughout the book and the many different librarians the library has had, and it is all intriguing. She gives anecdotes, facts and trivia and there’s so much in this book for individuals who love books and libraries.

Warren was probably the most avid reader who ever ran the library. She believed librarians’ single greatest responsibility was to read voraciously. Perhaps she advocated this in order to be sure librarians knew their books, but for Warren, this directive was based in emotion and philosophy: She wanted librarians to simply adore the act of reading for its own sake and perhaps, as a collateral benefit, they could inspire their patrons to read with a similarly insatiable appetite.

I work as a librarian and I love books and I love reading. Believe it or not, I know of some librarians who don’t read. It would appear that being a librarian in the twentieth-first century, you are valued for other skills besides reading and your love of books. Do I wish I could go back in time and live in a different era – sometimes?  But then Susan Orlean tells the story of Mary Jones who was asked to resign from her job as city librarian. Why? Because the board believed it would be in everyone’s best interests to have a man run the library. Even though in the same year’s report it was noted what fine work Mary Jones had accomplished as the city librarian.

As I said, this book is endlessly fascinating!

What I Am Watching

I managed to stretch Schitt’s Creek out for as long as possible. For anyone starting this series, give it some time, it takes some time to warm to and first feels a little cliche, but it is anything but. I finished season four which in my opinion is the BEST season! Every episode is perfect.

So I needed something to fill the void. Between all my reality television watching, I don’t have much time for other television but I like to watch something with a story every now and then. I have gone back to Felicity. I know some people didn’t like this series, but for some reason, I have always enjoyed this show.  I hated the last season. And this is probably my third time watching the show from season one, but I have found that I always stop watching before the final season because that season made me angry and frustrated. This time, though, I am going to watch every single season.

Why do I like Felicity? The first few episodes make me cringe and shake my head, but I love Felicity because she is honest, naive and she looks at the world with awe. She makes me remember that this world that we live in is full of awe-inspiring moments and we should not take any of it for granted. I love watching Felicity have all her firsts – the first time she goes against her parents, first boyfriend and so on. I love watching a show before mobile phones and before social media and before the Internet took over the world.

Also, this show reminds me that this is the reason that I fell in love with Keri Russell and how I have watched everything she has been in since. #obsessed